Hanoi. If you are not too good in coping with massive amounts of people filling the streets 24/7 while never obeying any traffic-rule you have ever learned in your life, this city is probably not the best place for you to be. But all the hustle and bustle shouldn’t keep you from going there, quite the opposite! Before I went to Hanoi I had never seen anything like it before. I mean – by the time I arrived there I had already traveled Bangkok, Cambodia and the entire south of Vietnam, so I sure was used to busy streets and the sound of motorbikes. But man, Hanoi took all of that to a whole new level. It. Was. Loud. And incredibly beautiful, just because of the uniqueness it held in so many ways. 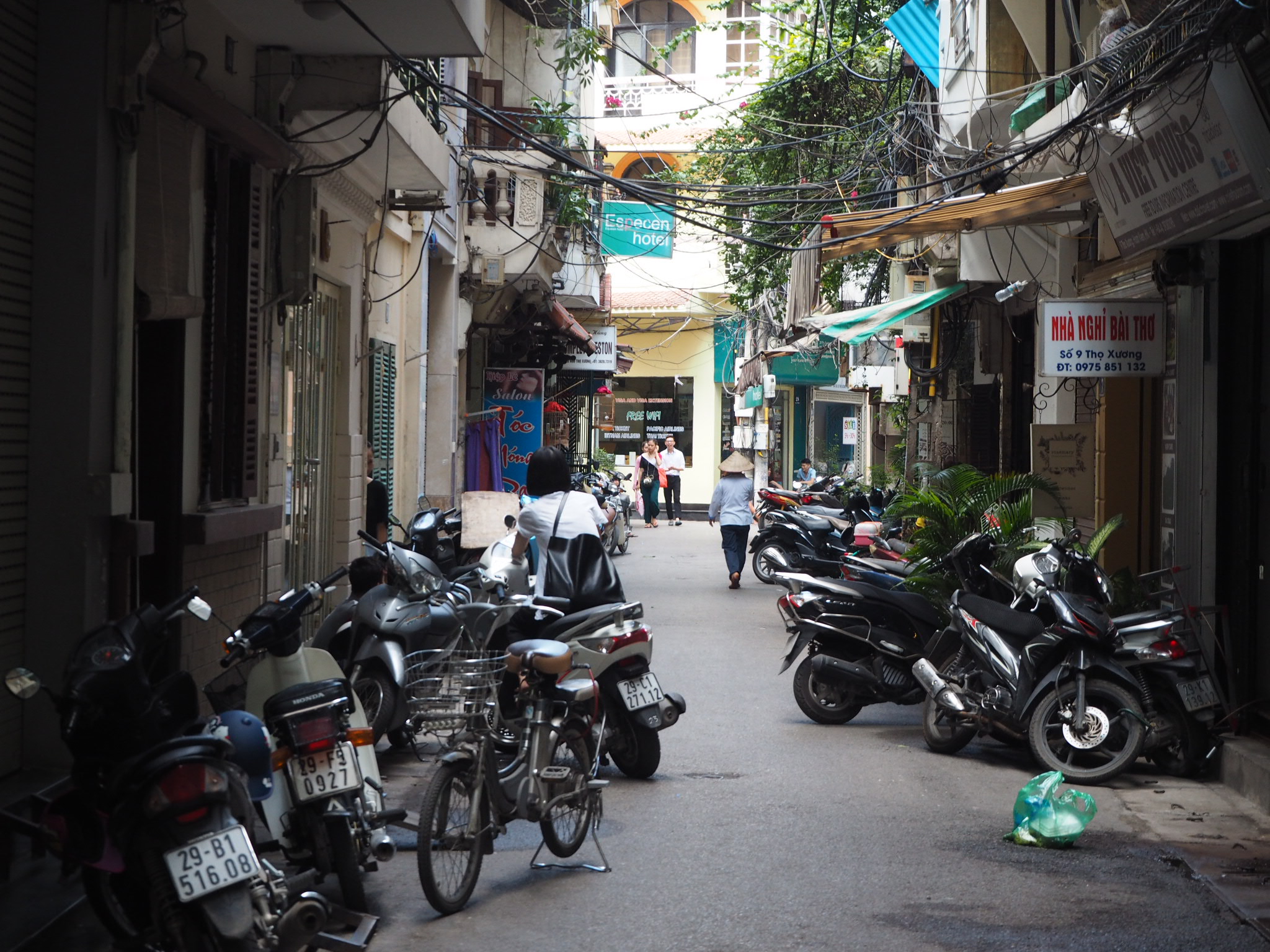 Did I feel safe? Well, for the most part yes. Of course there was the daily morning prayer which I felt was necessary in order to protect myself from being hit by a motorbike the second I step out of my hostel’s front door. Also, the first few minutes after my arrival in Hanoi, I got scammed. Badly. Which is why I want to give you this one, very valuable tip: If you happen to arrive in Hanoi by (night-)bus like I did myself, do NOT TAKE one of those super small blue-and-white taxis that are already waiting for you ar the street. The drivers will approach you and basically repeat „Meter, meter!“ because they know that you read your Lonely Planet, which told you to ONLY take taxis which use a meter. Well, surprise, this rule applies everywhere in Vietnam except from when you arrive by bus in Hanoi. The meters of those small taxis run at like triple the pace of the normal meter and you’ll end up paying 10 US$ for a 2km ride, which is a ridiculous amount of money in Vietnam. 1US$ would be more realistic. So take my advice here. If you have to take one of those taxis to get away from where the bus dropped you off, force the drivers to agree on a fixed rate. If that ends up being 5US$, fine. That is still hella expensive, but way cheaper than going with the meter. Do it. Trust me.

Apart from this not-so-nice encounter with the local taxi drivers, the people in Hanoi were super friendly, especially the staff in my hostel, which I mention later in this post. So let’s dive right into my tips for this beautiful city in North Vietnam.

Okay. I am committing a rhetorical crime by starting of with the very best place I found during the many days I spent in Vietnam’s capital: Lá Studio. It is a beautiful little art gallery that offers exclusively vegan food, such as freshly baked pies, cakes or donuts, alongside other stuff that is far from common in Vietnam – all I’ll say is ’nana nicecream! The owner (I believe her name is Khoai) is an incredibly sweet person and so easy to talk to. The place is so cozy and personal that you should definitely plan a trip there when you are in Hanoi! And yes, the place is VERY hidden. Don’t give up. Eventually you’ll find the little sign guiding you to the freshest vegan food in town. 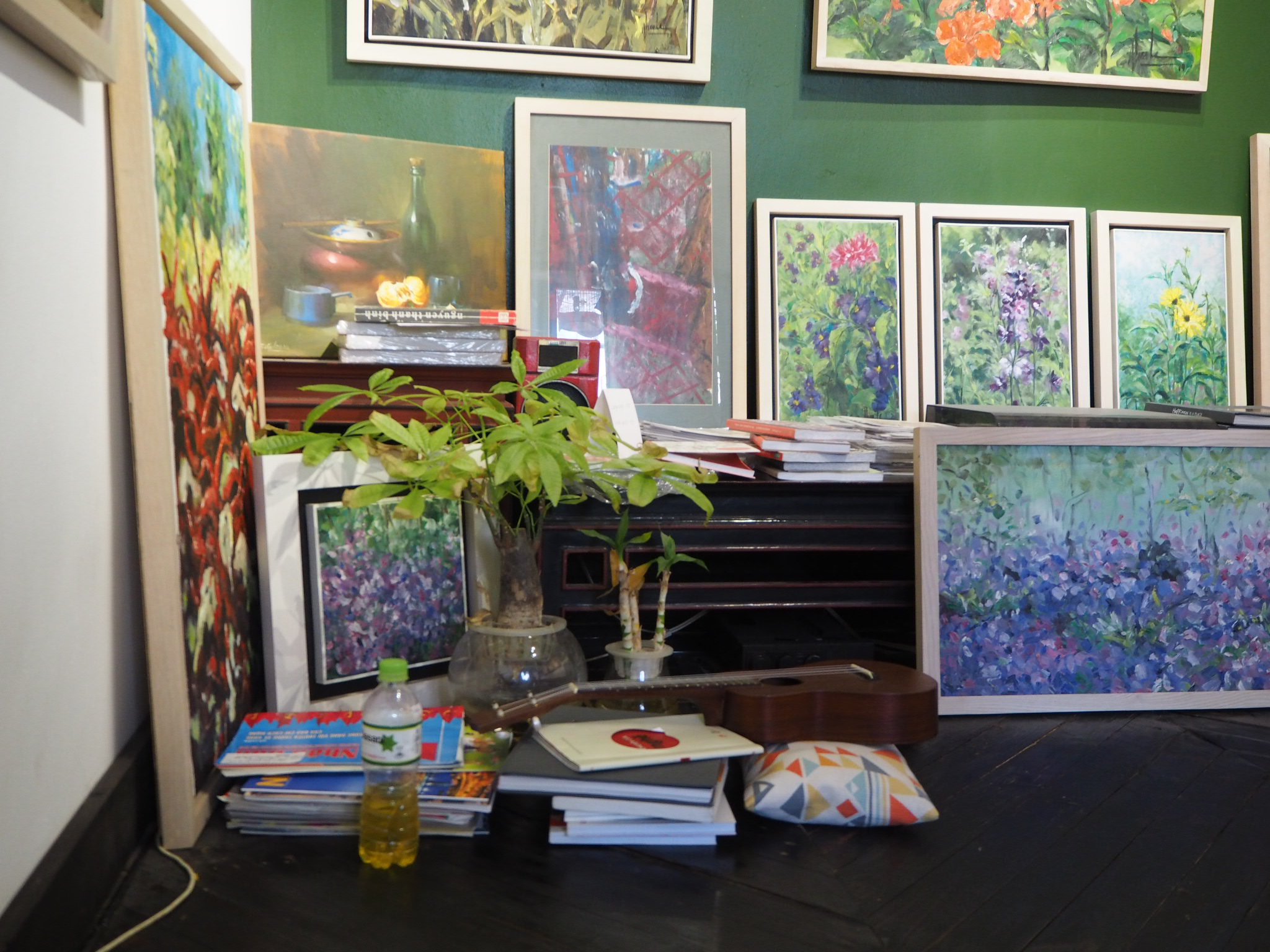 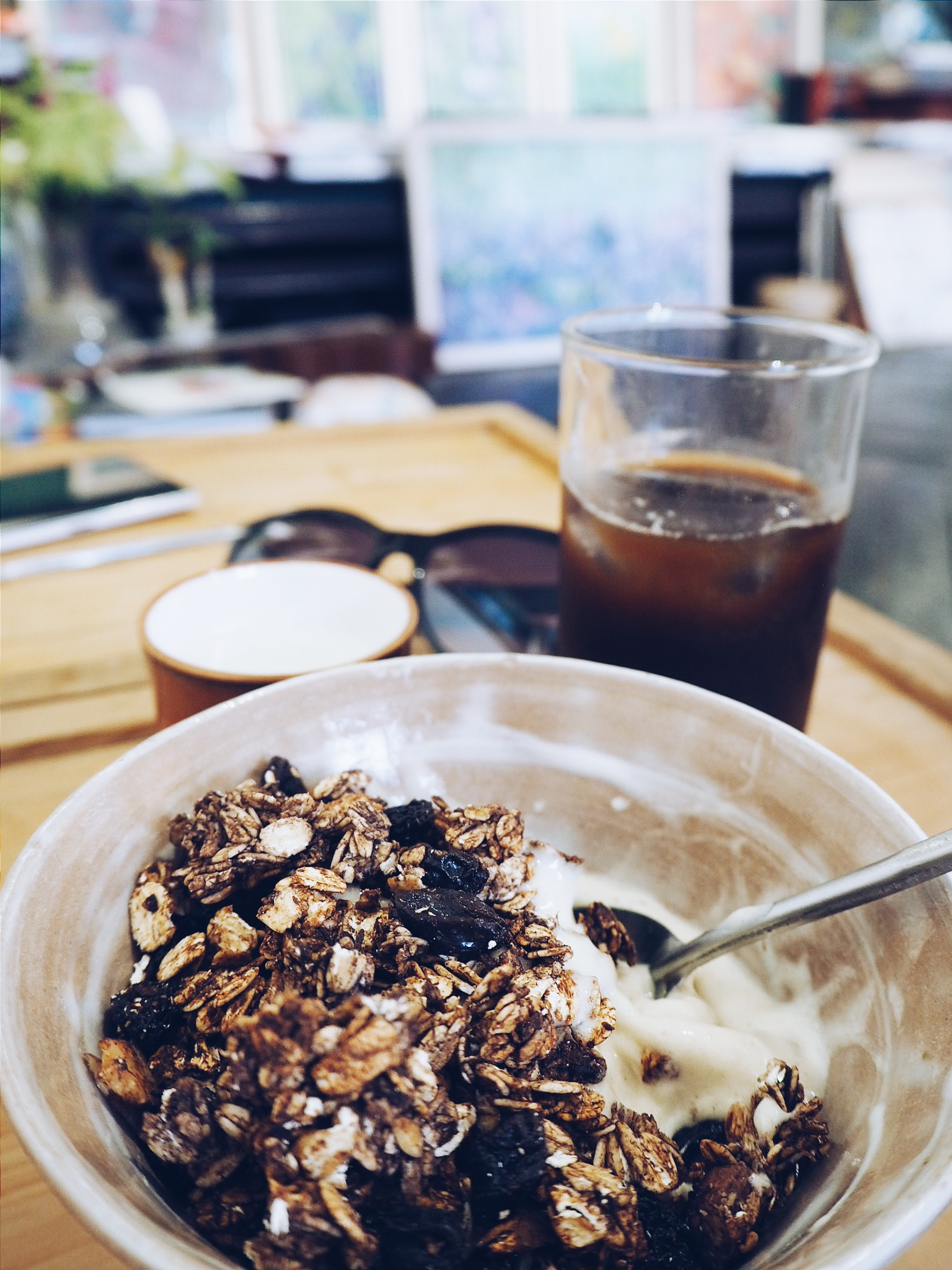 This little gem was the first vegan place I discovered after I had arrived to Hanoi. It is a yoga studio and a  café, offering all sorts of health food. Vegan chocolate cake, Vietnamese dishes, homemade granola, coffee, smoothies. And since the more rural areas of Vietnam have basically nothing vegan apart from rice, veggies and tofu (over and over AND OVER AGAIN) this place is a real oasis. Also the staff is super sweet and the atmosphere is beautifully quiet, since the place is tucked away behind the grey facades of a small street in the city. Don’t get discouraged if you don’t find it right away!! You have to make your way into a backyard, then take off your shoes and walk up some stars to get to where you want to be. But you’ll be rewarded with a quiet, peaceful cup of coffee. Promise.

Jalus sure is more on the pricier side of things, offering quite small portions to prices above average. BUT the food again is super good and also very fresh. You can get cake, lavender ice cream, quiche and burgers, which is quite something for Hanoi. The interior is very modern and smells of freshly cut wood, which I love, and if you can bear the heat on Hanoi’s streets you can also sit on their balcony and observe the traffic in front of the restaurant. The staff again is incredibly sweet AND I met my dear Claudia there, who ended up being one of the most important people crossing my path during my travels. So – if you are in Hanoi, just go there. Incredible things will happen. 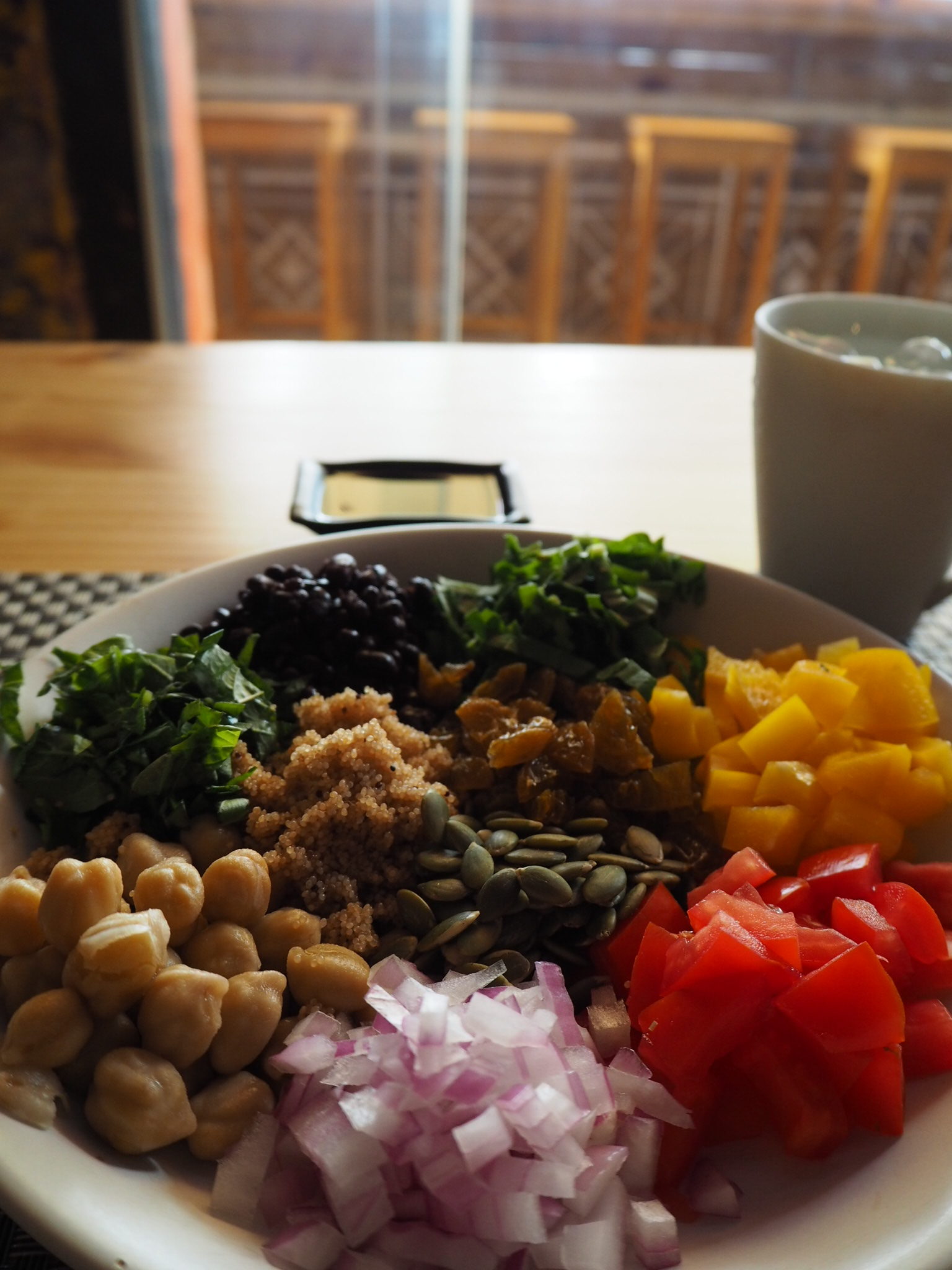 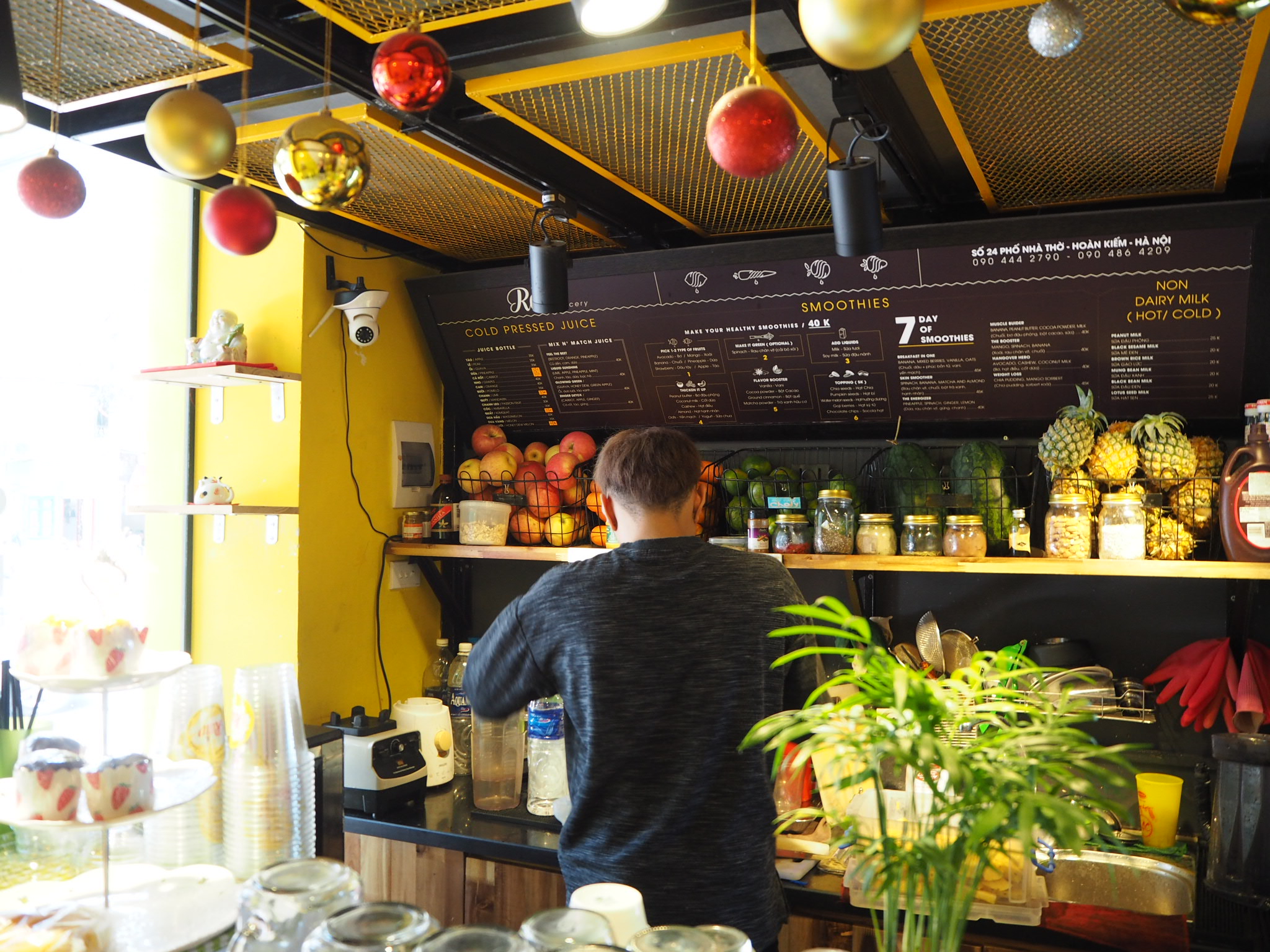 Very hidden in a very small yet super charming street, this little Café/Deli makes for a perfect mid-day break. It is by no means vegan (although they do list one vegan option in their menu), but you can have some iced tea and get one of the sandwiches made vegan which in my case was bomb. If I recall correctly, I had some grilled mushroom and aubergine with some kind of cheese-free pesto, just what I needed after a long walk through the city center. So just sit down, relax, enjoy the AC, friendly service and fairly European flair.

Also not a very vegan place, but one of the few places apart from Starbucks where you can get a decent Soylatte, and definitely worth visiting. The Note 7 hands out sticky notes and pens and encourages every guest to leave whatever they want to share with the world on the walls of the café. Which I did. But it is even more fun to read all the thing travelers as well as Vietnamese have left there. Have fun! 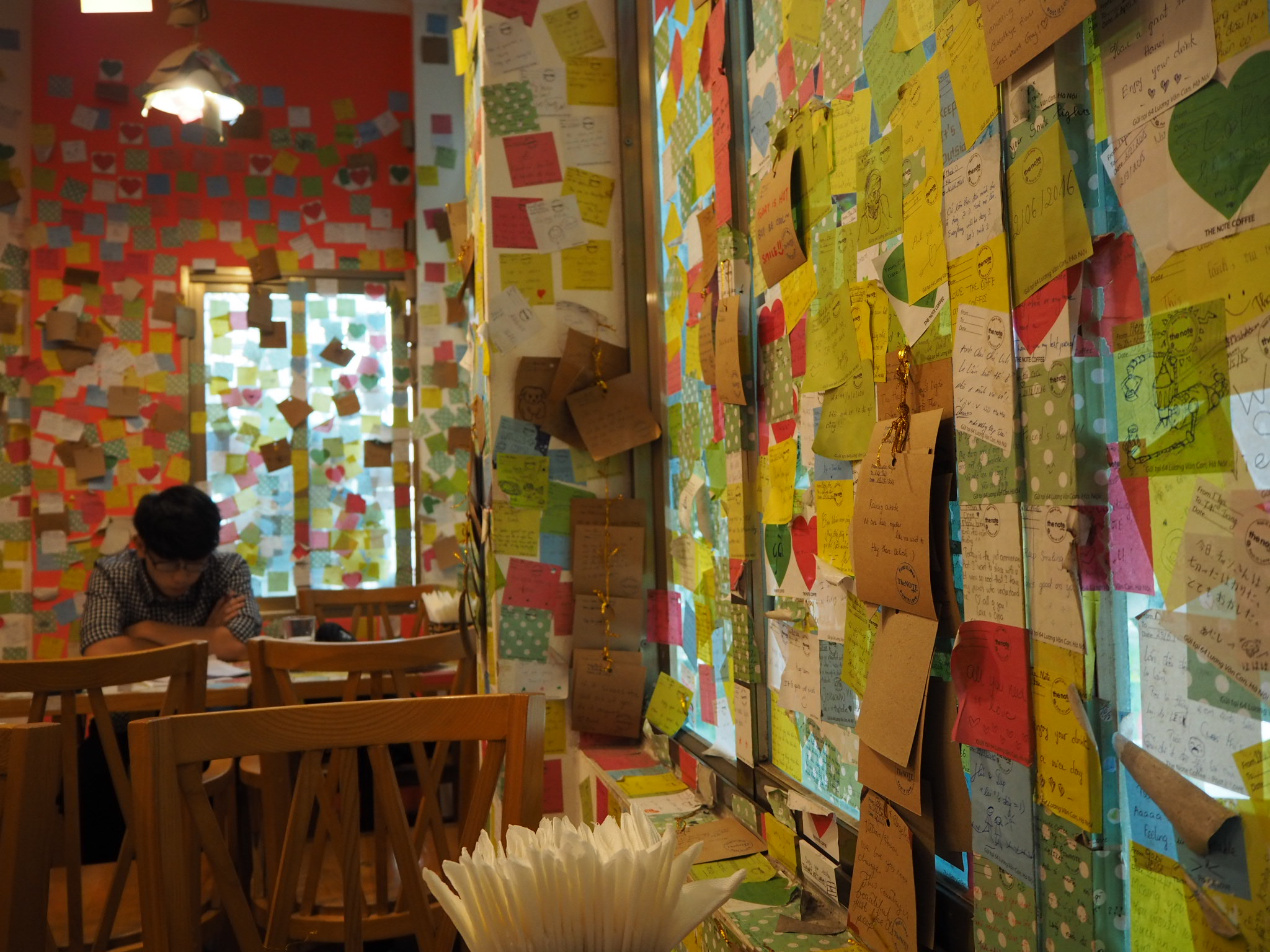 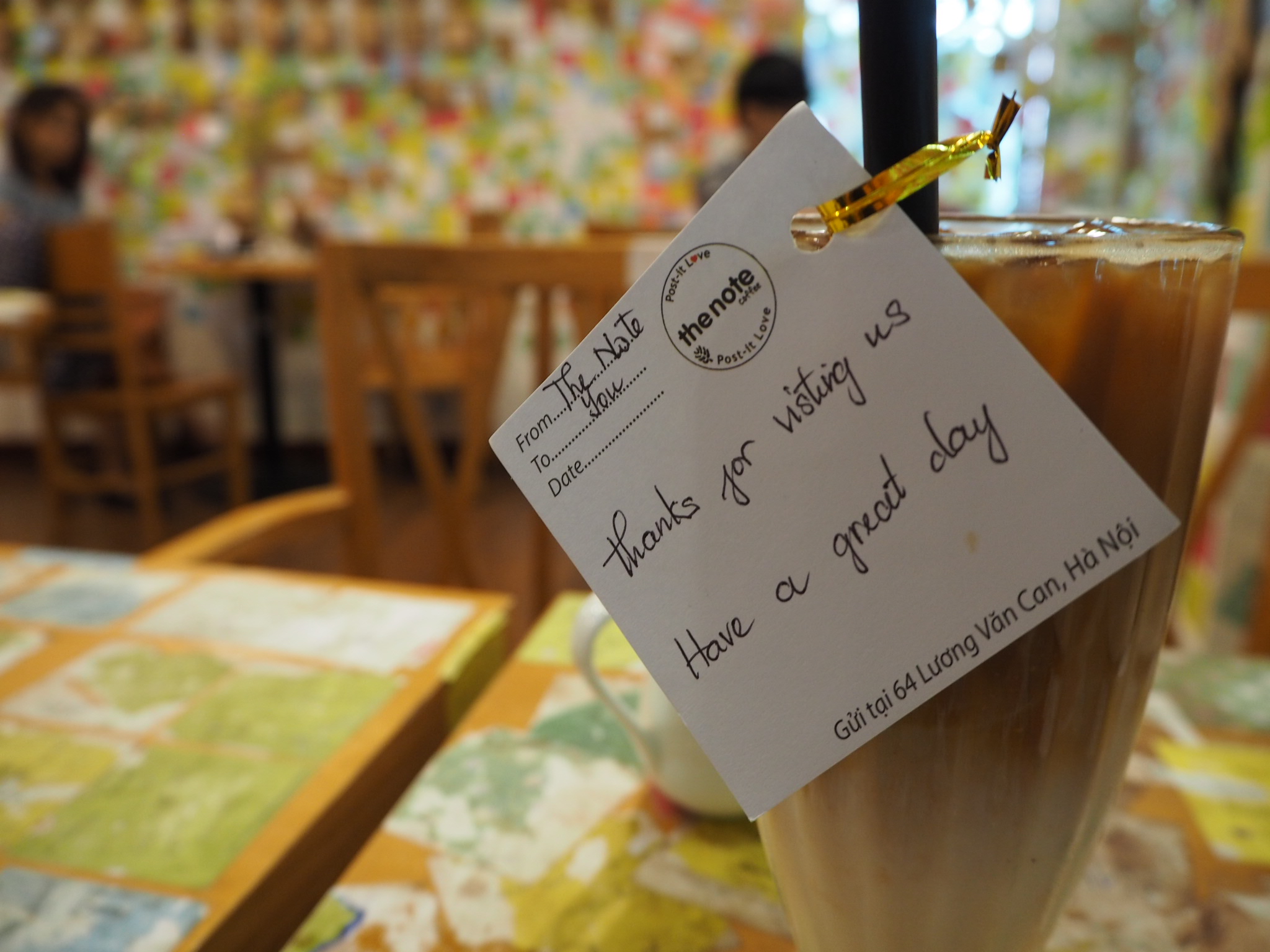 This is kind of a given. But let’s get the obvious stuff out of the way first: Ho Chi Minh, the communist leader who is still sung about up until today, well… lies there. In all of his glory. People have raised questions about whether or not the corpse seen REALLY is the great leader or just waxwork, but hey, as long as the tourists and Vietnamese pay the entrance fee it’s fine, right? I myself didn’t go visit this morbid exhibit, I just wandered around the grey cube and thought: „Oh well. It doesn’t get any more communist than that.“ and then visited the which is right next to the mausoleum anyways. And it is – impressive. In a very weird and intimidating way. After you have entered and climb up the stairs to the main exhibition, you are greeted by a 5 meter tall copper Ho Chi Minh, who is pointing his hand towards the horizon and looking at you grimly. Nice start. The rest of the exhibits is basically just underlining how great of a person Vietnamese think Ho Chi Minh must have been. I don’t know if he was. But this museum sure made me understand a whole different side of him than the western school system I grew up with has taught me. 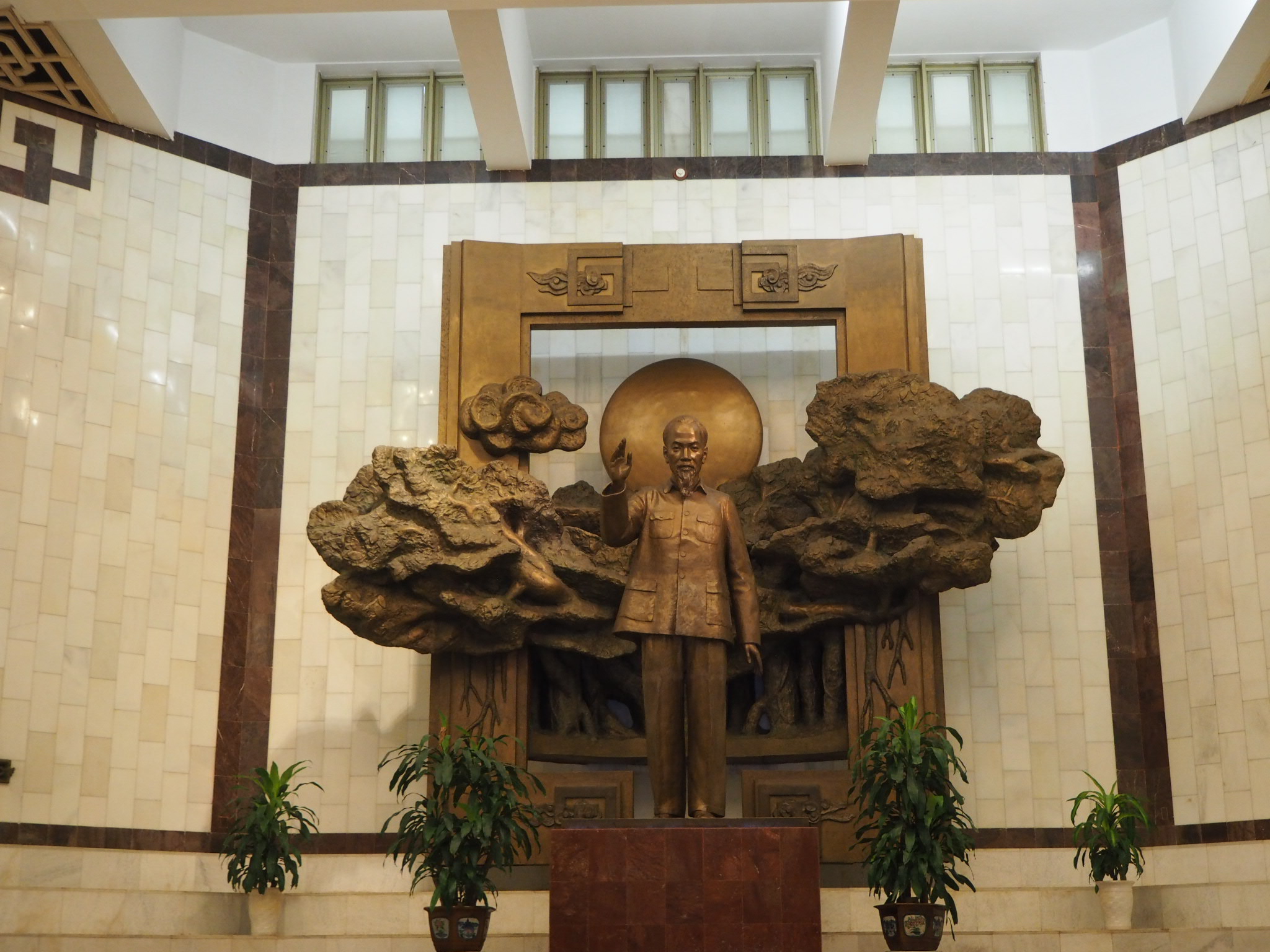 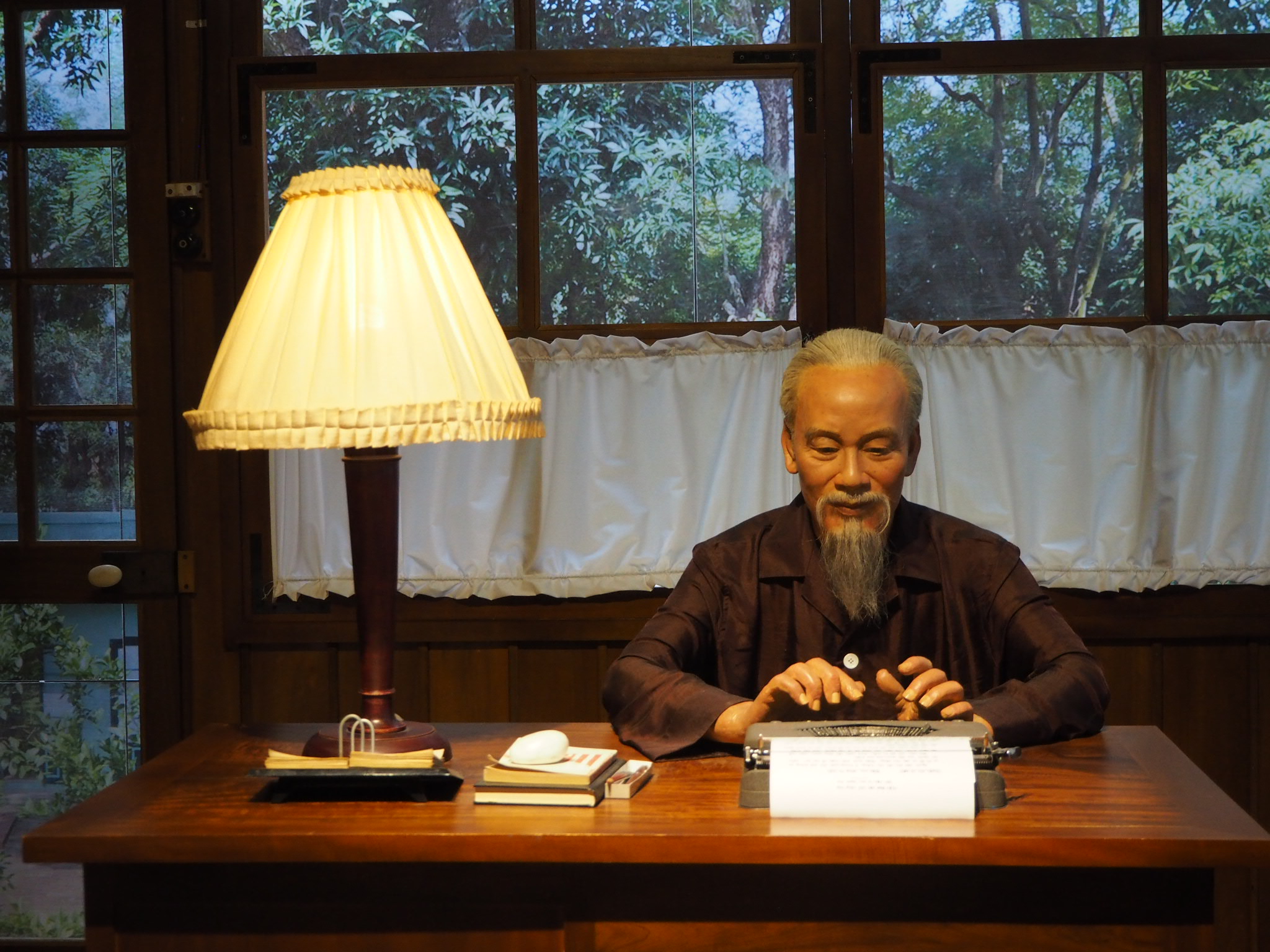 I’ll have to admit that, by the time I arrived in Hanoi and had seen pretty much the entire rest of the country, I was a bit tired of temples. But if you are starting your travels through Vietnam or Asia in general in Hanoi, I really recommend you checking out the Temple of Literature. It is a beautiful oasis right in the city center, a lush and green temple ground. Light some incense, look at the Buddha statues, enjoy the greenery. 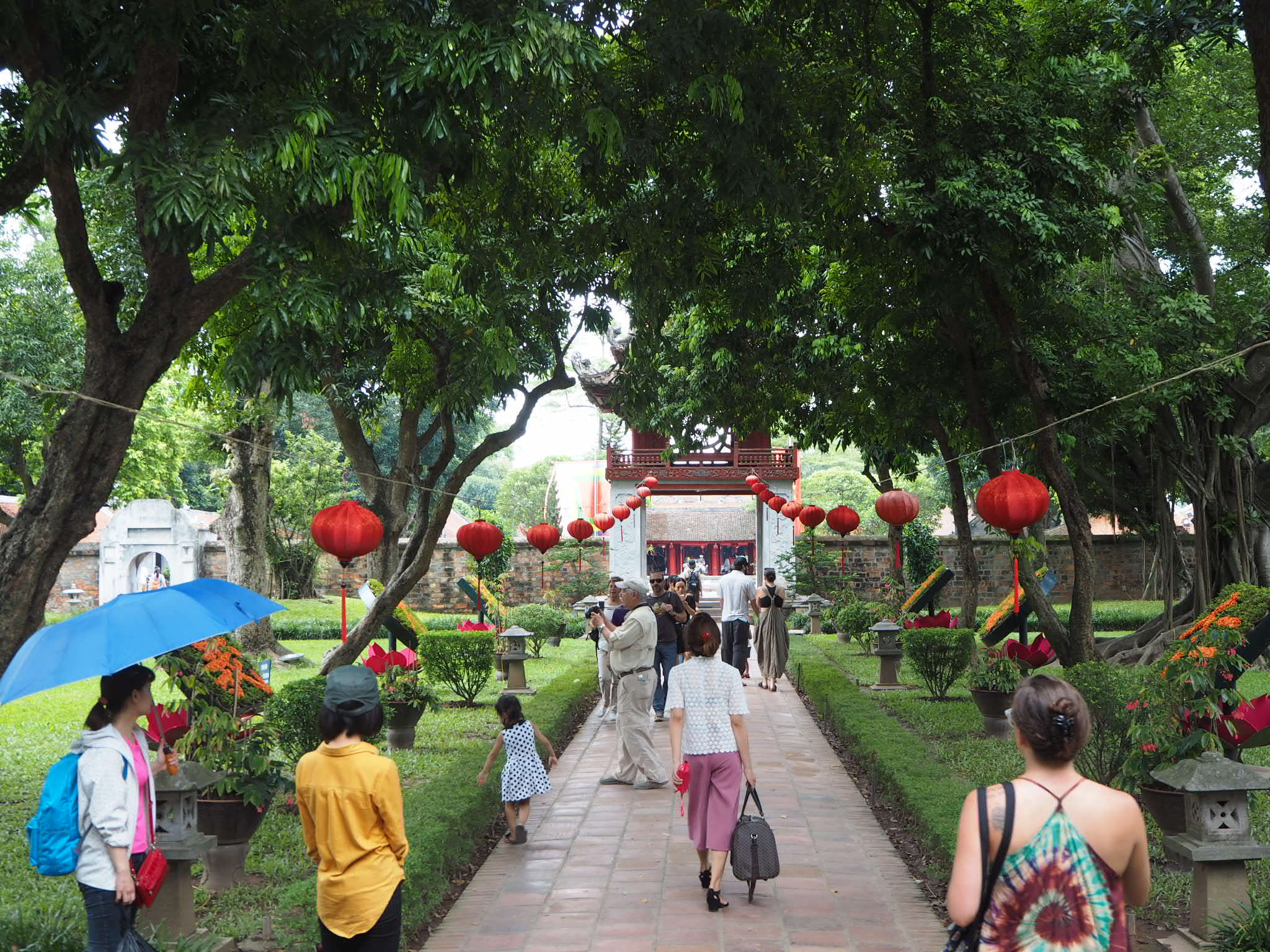 In case you are one of my German readers you might already know that I have a massive weakness for art museums. If you do not happen to have this interest (which is not uncommon at all, I am the weird one here), this museum might not be your thing. But if you are somewhat interested in art and how it connects to culture, you better check this place out. Again, it gives you a better understanding of what Vietnam and the countries history, culture and values are all about. 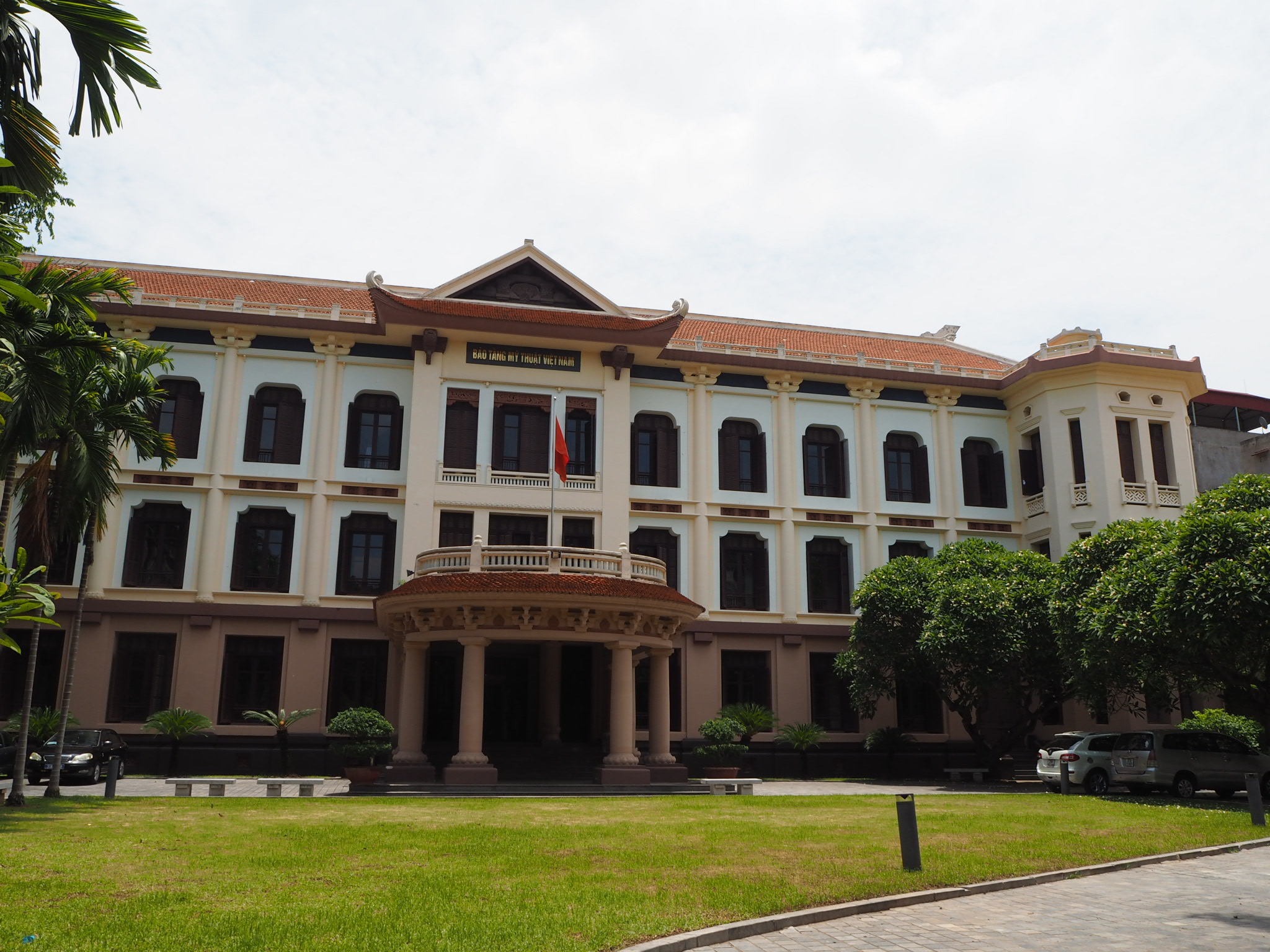 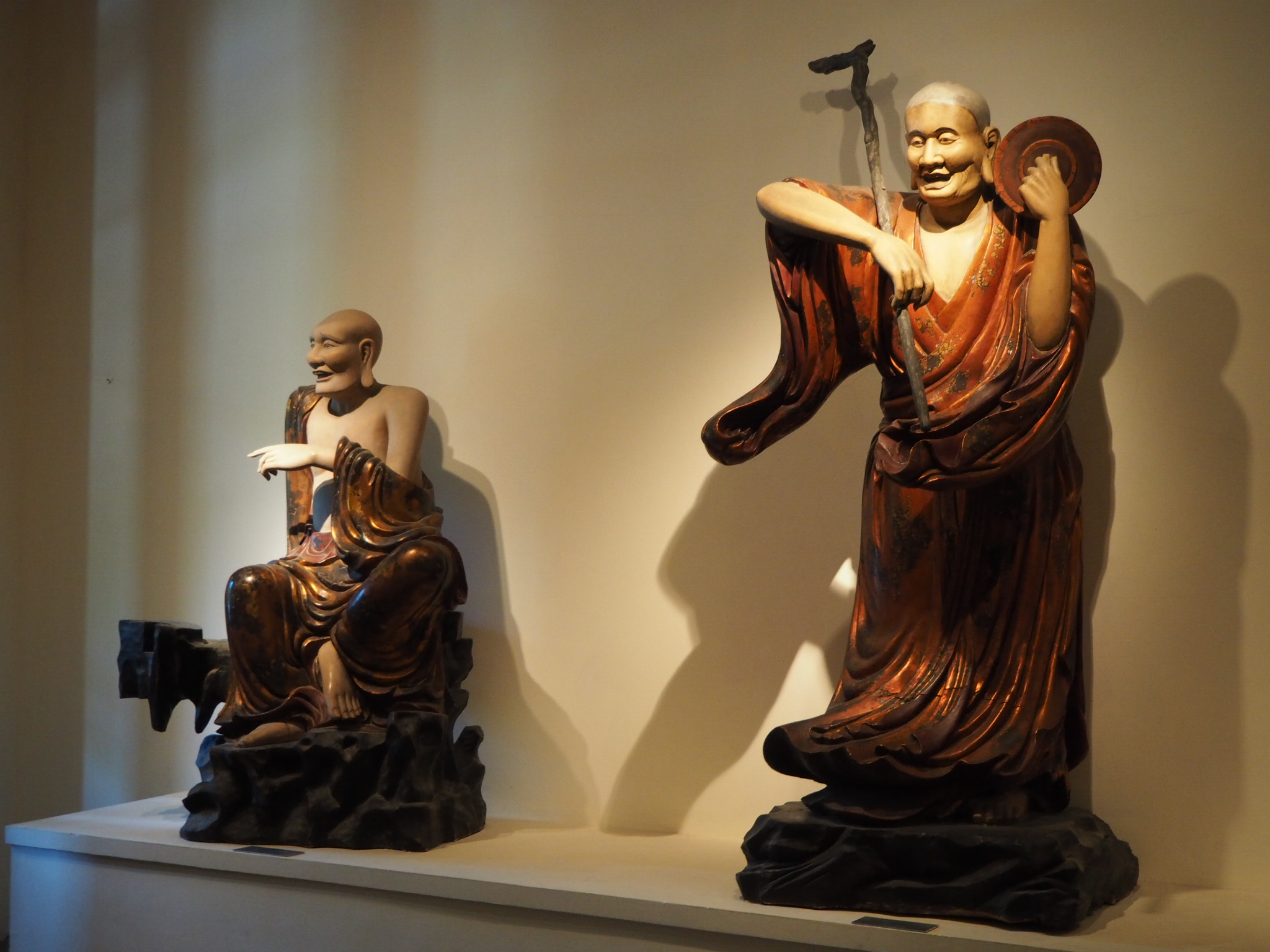 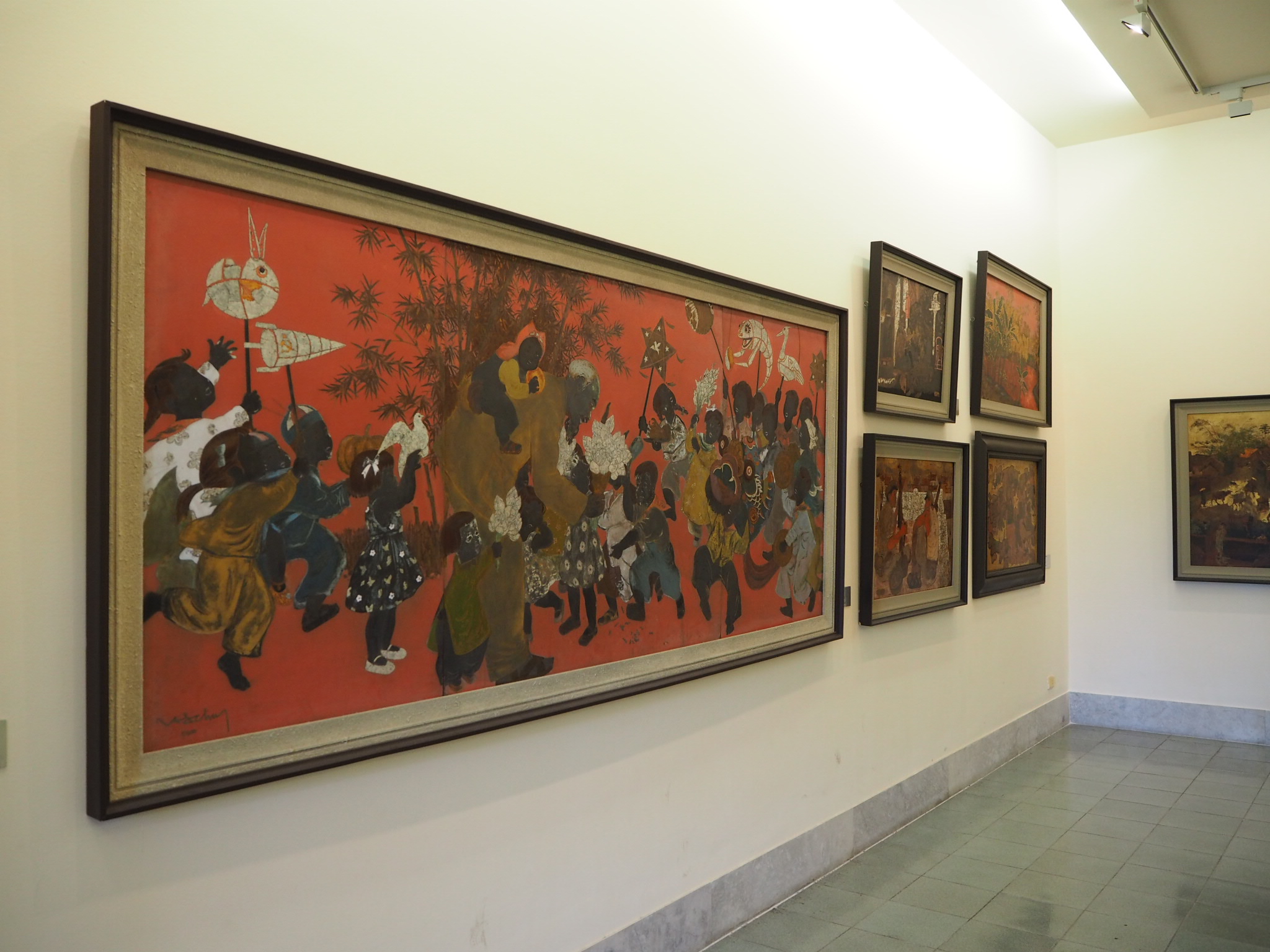 Okay. If you don’t want to do anything at all in Hanoi, that’s fine. But still, visiting a show at the Thang Long Theater is a must. Period. Yes, you won’t understand a word, but still, when have you ever seen a water puppet theater before, hm? And one with great international reputation, hm? For a FIVE DOLLAR ENTRANCE FEE, HM? Right. Never. So go there and enjoy. And please, please, please: Switch off your phone. Thank you. The beautiful and bright red Thê Húc Bridge leads you to a small island in the middle of the Hoàn Kiếm Lake, whose shores are a gathering point for both locals and tourists. On this very island you find a beautiful little temple, which isn’t too exciting itself. But it is surrounded by serene water and meadows, which makes it a very calming spot in the middle of the bustling capital. So whenever you need a break from everything, go to the Ngoc Son Temple and gaze at the water for a bit. It helps a lot. 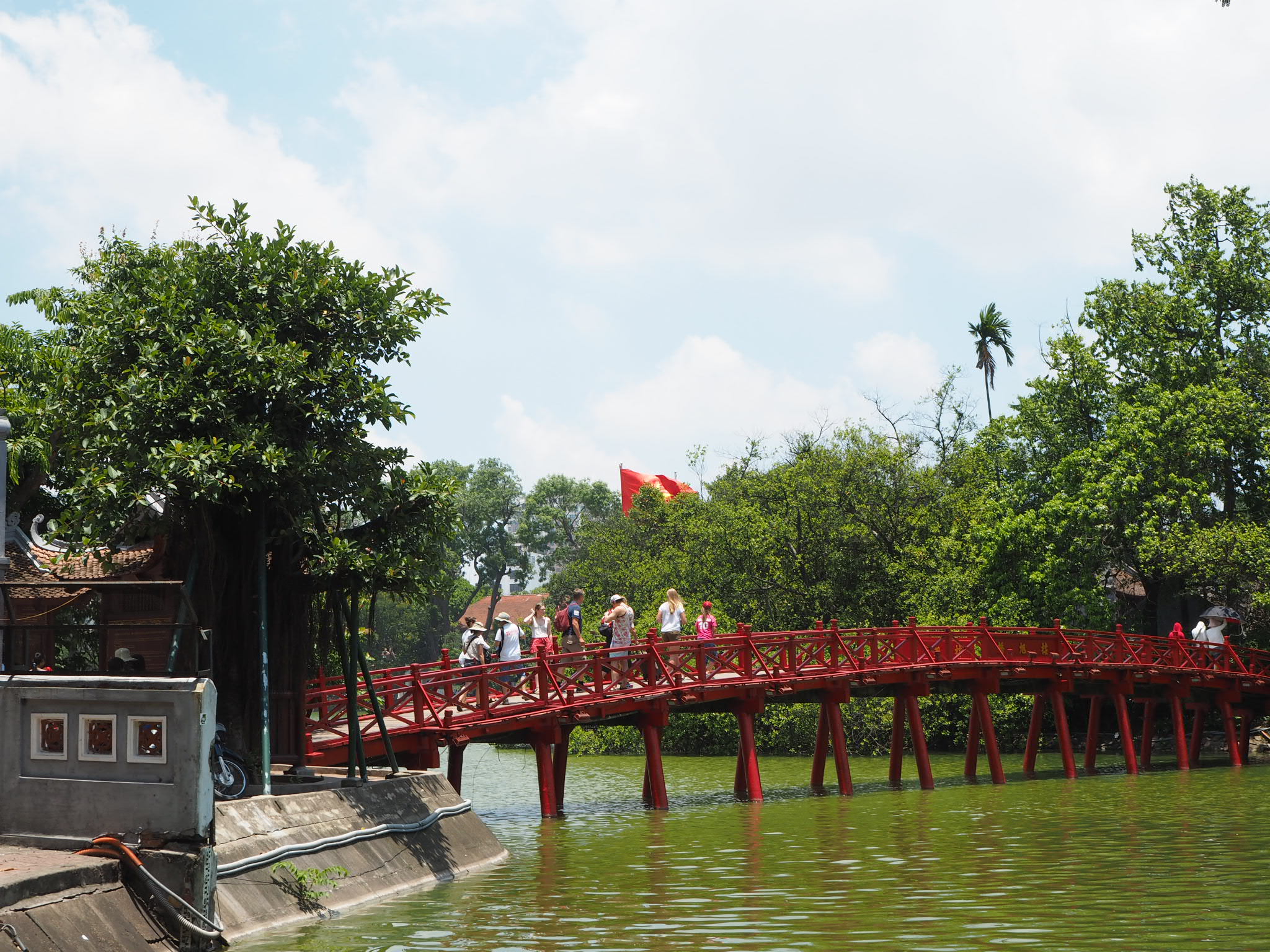 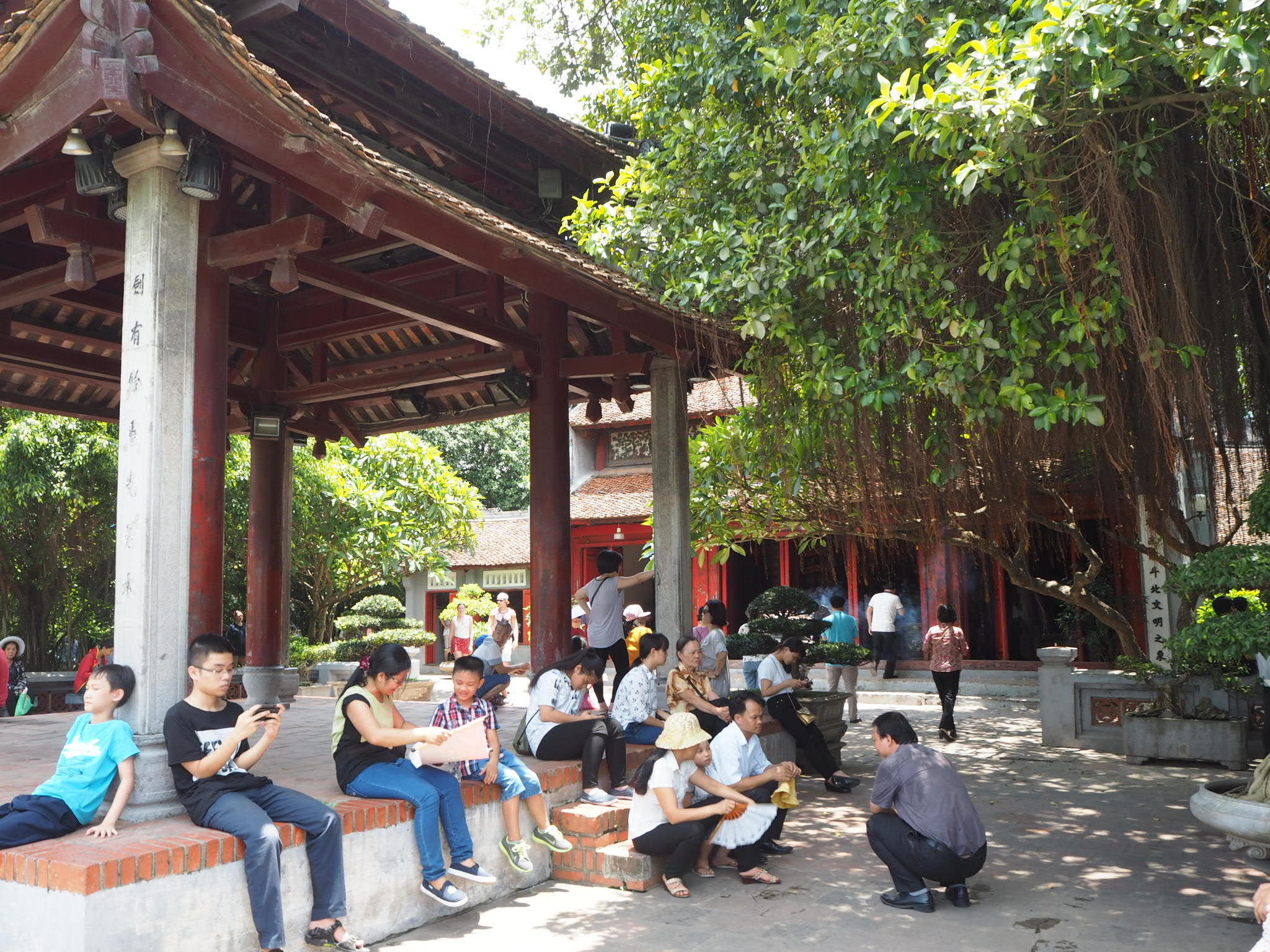 I am convinced I found the very best hostel in Hanoi, given that I am not someone who is into partying while being on a solo trip. If you want to party, go somewhere else. But if you want the nicest staff, cleanest beds, best service and panorama windows allowing you to see the beautiful Hanoi Cathedral while you are falling asleep, go to Chien Hostel. They were always super helpful with every issue I had (and I did have quite some issues, sitting in Hanoi with an infected burn on my leg) and even let me check into my room after I arrived with the night bus at 5 in the morning. That is true service people! You will learn to appreciate those little things after backpacking for a few months, believe me. PLUS living right next to Hanoi Cathetral does not just put you right into the city center, but also makes it super easy for you to explain the taxi drivers where they have to go. 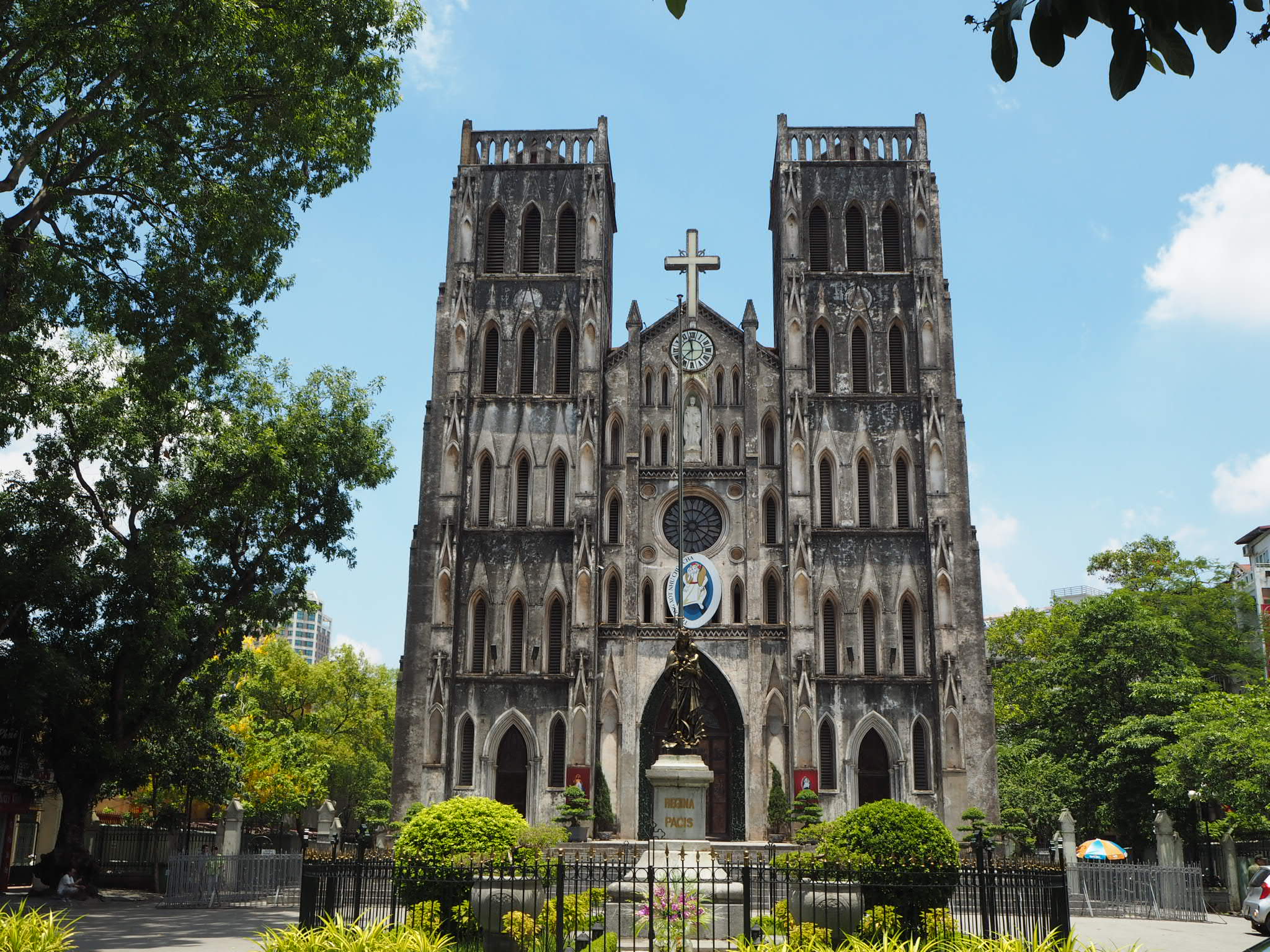 One more thing: If you are in Hanoi, let that be your base camp for some adventure trips to Halong Bay (I probably do not have to tell you why you should go there, right? Google some pictures and you will know why) and – and this one is important – Sapa. I had some of the most incredible experiences of my entire four months trip in this small town up in the mountains, so go there if you can. Make time for it. I promise it will pay off.

And now – go book a flight!